Went to the last drift event of the season today and had a pretty satisfying experience. My car's cooling system seemed stable during the whole day; no leaks, the temp needle didn't budge from the middle of the gauge, and the electric fan kicked in when it needed to so that I never had to flip the manual fan switch on.

I ran a pair of brand new 205-50-15 Dunlop DZ101s on the front and ran my ~3 year old 205-50-15 Falken Azenis RT-615s in the rear (these tires have been exposed to at least 3 winters so the compound seemed really hardened up like passenger tires). Normally this setup would seem bad since the RT-615s are a superior tire (think street-legal "racing tires / slicks") and one would not want to have more grip in the rear than in the front so as not to have the car understeer like mad. However, because the Azenis were pretty old and hardened they seemed to do their job well.

After figuring out how to clutch-kick for real during my personal practice day last month, I was able to initiate drifts fairly consistently throughout the day. However, after initiating the drift I found that the rear would slide out too much because I would be using too much throttle and end the beginning of the "drift" with a spin.

Later on in the day I managed to carry the drift a small amount, however, when it came time to transition and carry the drift in the opposite direction, I would instantly spin. One of the guys there said that my problem was letting off the throttle during the transition and instead I would want to keep on the throttle and ease the car into the transition. This advice helped a lot during the slalom section of the course and I was able to sorta drift along back and forth, ignoring all the clipping points for the sake of just trying to drift at all. I wasn't able to successfully complete the first two turns in succession during the day though with more practice I think I will be able to do it eventually.

On my last run I performed an experiment, I started my run about 30 feet behind the starting line to get more speed before initiating into turn 1. This allowed me to get into 3rd gear in an attempt to clutch-kick initiate in 3rd gear. This method seemed like a great idea as I nearly completed the drift but failed to transition. All my previous runs were in 2nd gear and I found that I was running out of revs to clutch-kick and wasn't able to initiate at all toward the end of the course. 3rd gear appears to be the solution to this problem. It means I'll probably be going faster, but hopefully will also allow me to improve and get to the point where I can successfully complete an entire drift run. 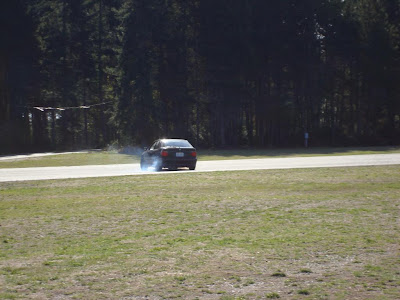