Just got back from Denver last night for some job-hunt / job-related activities.  I'll be sure to keep posted if there's some progress with that regard.  Hopefully the stress will start to go away now that some of the pressure is over.  However, I have to fly out to Michigan sometime next month so the stress will probably kick in all over again.

Last video from PAX is posted below:

Spent a bit of today at PAX again.  Saturday definitely was much more energized than Friday; the place was pretty packed, the number of cosplayers was still low but much better than yesterday, still a cool event as usual.  I picked up a couple derpy swag items before I left for the day too. 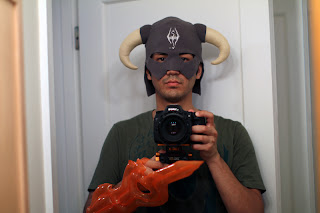 Aiming to release 2 videos for PAX, editing is quite difficult for some reason.  Tomorrow I'll be flying out early in the morning for work-related stuff.  Feeling really busy and stressed lately because of it.  Hopefully next week is much better.

First release is below (second vid will probably be out on Tuesday):

Today was the first day of the Penny Arcade Expo, otherwise known as PAX (Prime).  The event is essentially like a smaller (?) version of the Electronic Entertainment Expo (E3) while being catered to gamers and normal people as opposed to industry and media.

This was my first time attending PAX and I wasn't sure what to expect.  My original intention or purpose for going to PAX was to film cosplayers as PAX is a gaming convention as opposed to an anime / Japanese entertainment convention--so I was hoping to catch some sweet video game cosplays...  I knew that PAX wasn't a cosplay event but given an attendance of 60-70,000 people I figured that there should statistically be a reasonable number of cosplayers to feature... NOPE.  A massive cosplay drought was detected.  Given that I can't really release a video featuring as few as 3 cosplayers it looks like I'll be doing an event montage as opposed to a cosplayer montage. It's hard to pass judgement right now, perhaps all the cosplayers are waiting to make a big debut tomorrow, I'll find out then.

Aside from the shortage of cosplayers, PAX is a pretty cool convention.  If you go with a friend and play tons of new unreleased games you're sure to have a blast.  The developer booths in the exhibition halls are really awesome with lots of gigantic statues, display screens, and fancy lighting.  As I mentioned previously, it's an event for gamers, nearly every booth at PAX has playable games with tons of slots and there's tons of free stuff to be grabbed as well.  I attended the Tokyo Game Show (TGS) last summer and PAX is by far a much more entertaining event (again industry vs gamer).  You could go to TGS and you would be fortunate to get to play more than 1 game.  At PAX the lines were reasonable and many booths had open spaces to play.

I'll probably release whatever splicing of footage I manage to capture tomorrow evening sometime--stay tuned!
Posted by FastMatt at 7:56 PM No comments:

Posted by FastMatt at 9:02 AM No comments:

Just got back from doing media work at the XDC Seattle drift event.  All in all it went ok, it was a bit disappointing to find out that media people could only be in 2 areas of the track, either by the starting area or off to the side by a hill.  No media personnel were actually allowed on the course.  Basically what this meant is that the "grandstands" spectator area pretty much offered a better view that what the media people had access to on the track.  I was running an ultra-wide angle lens so pretty much all the shots I took are unacceptable.

There were a lot of guys out there doing video so it should be interesting to see what they come up with.  I don't plan on doing anything too fancy in terms of editing so should be fairly quick and dirty.
Posted by FastMatt at 8:11 PM No comments: 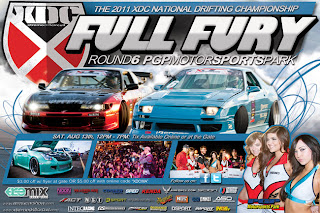 Recently I heard that the Xtreme Drift Circuit (XDC) is having their first PacNW event at Pacific Grand Prix (PGP) next week.  I'm not all that familiar with XDC though from what I understand, it is sort of like Formula D except at a much more accessible competitive level to grassroots / amateur drifters--people like you and me.  I initially hadn't planned on attending this event, however, I applied for a media pass on a whim and it was granted.  So I'll be representing DriftDoctor.com next Saturday with some video coverage.

It'll be my first motorsports / drifting video, which I'm somewhat excited about.  My only apprehension is that when you've seen one drift video it's like you've seen them all as far as content goes.  So I guess my goal is to try and make a video that's hopefully not very monotonous.
Posted by FastMatt at 3:39 PM No comments: