There has been a large influx of so-called "greatest" / "best" / "most-amazing" wedding proposal videos floating around the Internets as of late. And not surprisingly, most have been total cheese-fests (proposal videos don't really make for great films as you already have an idea about what's going to happen before you load the video).

However, there is one video that was recently released which I must admit is quite impressive among all aspects. The video quickly draws you in, is full of interesting content, and is filmed, edited, and narrated extremely well.

It's quite a piece of work for what it was intended to accomplish. Was it merely a proposal video or was it done purely for the sake of entertainment? Check it out for yourself below: 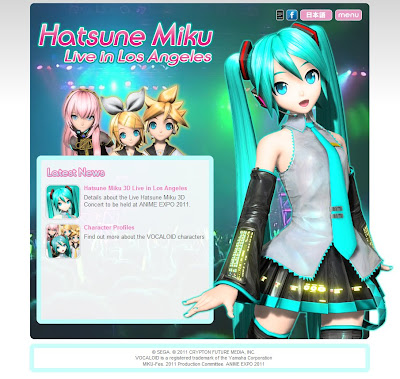 On a similar note to the previous post, it was announced last Thursday that Hatsune Miku will be performing a concert in Los Angeles (Miku-Fes) as a special guest for Anime Expo (AX) 2011 in 7 weeks time. This news is very exciting although I have a small amount of apprehension. This is because the last concert that Miku performed on March 9th, 2011 (Miku-pa) was a big let-down to all her fans as the concert was effectively 30 minutes long and instead of the transparent projection screen used in Miku's first concert last year, she was played on a fairly small-sized flat screen display. Fans were outraged for being led to believe that 2011's concert would "out-do" last years'.

Regardless of this quality aspect, I think fans in America are very excited and happy that Sega and Crypton Media are bringing Miku to the states for a first-ever vocaloid concert in America--I know I am.

^_^. Though I'm a little saddened by this: No cameras or recording devices allowed. (No photography or video recording.)

Edit: Did some research and evidently a group (5pb. Inc.) other than SEGA put on the last (bad) Miku concert and that SEGA will be putting on the upcoming concert in LA so high-quality entertainment should be had!
Posted by FastMatt at 8:27 PM No comments: 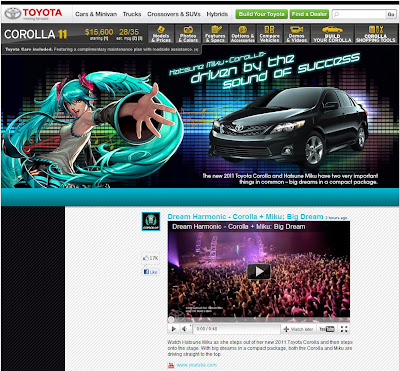 Today I found out about the new marketing campaign for the Toyota Corolla which revolves around the theme: Big Dreams. That's fine and dandy, except the big dreams they're referring to involve Hatsune Miku, the virtual diva program by Crypton Media/SEGA. This bothers me quite a bit because what I didn't mention is that this is a new marketing campaign in the United States of all places--there's even a TV ad. This bothers me because practically nobody (relatively speaking) in America even knows who / what Miku is and now that she's being introduced, she's becoming Americanized.

I don't really understand what Toyota is trying to accomplish with this campaign. My understanding is that Toyota realizes or has noticed the rising popularity of Miku-related videos on Youtube and is trying to ride on the coattails of Miku's virulent potential--hence the comment, "With big dreams in a compact package, both the Corolla and Miku are driving straight to the top." Perhaps it was also in Crypton Media's interest to break out into the American market as they have expressed interest in creating an English-speaking vocaloid.

Whatever the case, the way everything is being presented doesn't sit well with me--but that's irrelevant because I probably will never buy a Toyota in my life if they continue to maintain their "boring, lifeless, disconnected econobox" business model.

American-style Miku doesn't really match her image also, but I won't go into discussing the "Americanization" of popular non-American media this time. The real Miku is below: 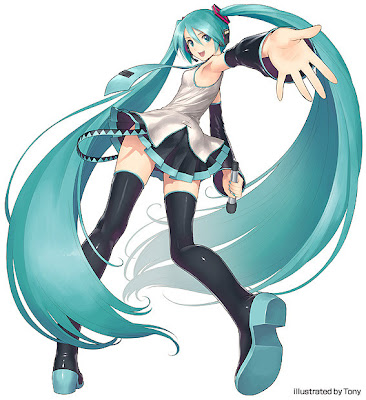