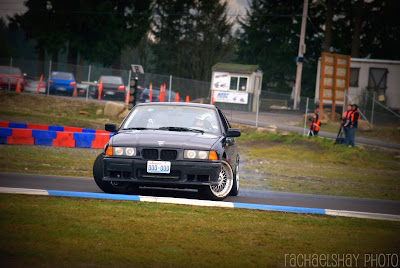 One of the resident guys at Big Boy Media, a PacNW drifting blog / media consortium of sorts, gave me sort of a shout out. It's my first time so it's kinda exciting. Here's what he had to say:

"Last but not least on my list is this BMW, although I manage to miss his name at every event, he continues to shock me at his progress over the last year. One of the quietest cars on the track, and with the elast amount of stickers or damage, it really is a pleasure to photograph and watch as he attacks the track with style."

I don't have much presence on the track because my car is so quiet but being one of the few and sometimes the only non-Japanese car at some events gets at least a little attention which is fun. Hopefully it gets even better from here on out.
Posted by FastMatt at 8:59 PM 2 comments:

Attended my first event of the year today, I wasn't the only one who had the idea either as the course was PACKED. The weather forecast stated it would be a horrible day but it was kinda nice for a little while, or at least until a little after lunch time--then it did get horrible with a downpour of rain. My car held up though which was / is the most important point so all in all it was a decent day / event. I hadn't drifted in a while so I was pretty rough at the beginning but then it started to come back and things got smoother. Drifting is really all about weight transitions, shifting back and forth, teetering at the edge of car's limits. Everything has to be precisely calculated because if you don't manage entering the turn, holding the turn, exiting the turn, or linking the next turn just right then you either lose control or you go off the course. There is a small window for correction but this is governed by how wide your road is--naturally the wider the road the more room you have to miscalculate everything I mentioned in the previous sentence.

I still have a long ways to go in order to improve. I haven't even started or tried doing e-brake entries yet which allow you to enter turns with crazy speed and potential danger. Managed to capture some video during this event although most of my driving during it was pretty terrible as I wasn't able to link as many corners as I'd liked but here are a few highlights:

Hopefully some media from the event will be released soon as well.
Posted by FastMatt at 11:13 PM No comments: