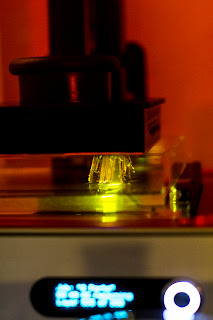 After working with the Form 1 since the last update, I've obtained a better understanding of the capabilities of the printer in addition to many necessary printing design considerations.  In the meantime I've printed an array of objects pulled from the internet to do so.


For example, I printed a popular 3D secret heartbox which is an object that works really well when printed using a standard FDM printer--easily opening up, rotating / transforming, etc.  However, things didn't work as smoothly when printed from resin using SLA.  One issue that is of concern is the fact that a small amount of resin can get trapped in the interior of the box as it's printing, added to the fact that after the object is printed, a viscous layer of resin is coating the build platform and part, creating a sticky mess that takes a large amount of rinsing in isopropyl alcohol to clean off.  This stickiness is a very large hindrance in the smooth / proper operation of printed rotating hinges.  Standard FDM prints from PLA plastic or ABS are smooth and dry so "built-in hinges" work very well--the opposite is true when printing from resin.  If the rotating hinge joint is able to be rinsed extremely well and fully-dried it may be possible to get smooth rotating action, but with complex models this may be completely impossible.  Therefore it seems like rotating joints will need to be printed in multiple pieces and assembled after the fact.


Solid objects with decent (>9 mm2 square solid) thickness print extremely well and are very rigid and strong.  However, thin objects are very soft and flexible when newly printed and are easily prone to being damaged until the "solvent-like" excess resin is washed away. 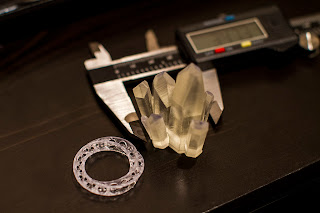 I tried printing a complex phone case but the results were disastrous as the object would delaminate in sections when printed directly onto the build platform without supports.  The printed parts adhere extremely strongly to the steel build platform as well and require massive amounts of force to remove, causing fragile parts to be easily damaged during removal--which is what happened when trying to peel the phone case off the build platform.  A second printing attempt was made using supports, however, the supports are still extremely strong in bulk and are not easily "peeled away" when the printed part is thin and fragile.  An exacto knife is likely necessary to cut delicate parts free from the supporting structures. 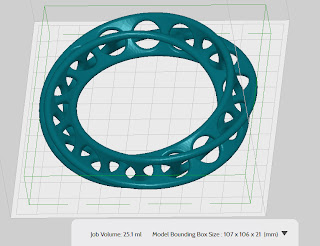 A friend made a request for a large "bracelet-sized" Möbius strip after seeing the miniature version above, so that part is currently being constructed at the moment.  Additionally, I've received requests for 3D printed wearable jewelry, so that is next on the agenda.  I have some ideas in mind which I'll be attempting to draw in CAD and prototyping shortly.


About a week after the Form 1 arrived, the printing resin was finally delivered.  This means it's time to actually start making things!!  Unfortunately, I didn't have the foresight to create a bunch of objects prior to the printer arriving, so I had to improvise and fetch some objects from Thingiverse, an opensource 3D printing design compendium.  However, the very first object I printed was in-fact an object I designed in a rush using CAD.  One of my Miku Nendoroid figure stands broke, so I saw fit to solve the problem with a little creative engineering.  Using digital calipers, I recorded the dimensions of the unbroken stand arm and replicated the piece using dimensional constraints in 3D CAD software.  I saved the model as an .stl file and loaded it into the Form 1's printing software (PreForm). 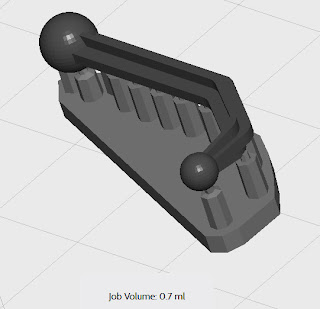 After generating support geometry (to prevent the model from collapsing or drooping as it's printed), the software automatically slices the model into individual layers (which are programmed pathways that the printer's laser traces or rasterizes during operation) which are then uploaded to the printer itself.  All that's left to do is press the "GO" button on the printer and away it goes!


It's pretty awesome seeing the Form 1 in action as the laser rasterizes extremely fast.  After the laser completes a layer, the resin tank lowers and raises back into position which I presume is allow fresh resin to flow under the printed model in preparation for printing the next layer.


The figure stand that I designed took about 40 minutes to print and surprisingly looks very similar to the stock piece.  The material properties aren't quite the same (the printed plastic isn't nearly as hard or durable) but visually the printed part looks great!

Next I downloaded a nice looking owl model off Thingiverse, scaled down the size to a couple inches and sent it off to the printer.  5 hours later and the owl was finished.  The owl print also looks pretty fantastic and is completely smooth to the touch as well.  Small details in the model like the texture of the log are also preserved which is quite impressive.

So as it stands, I'm really pleased with the capabilities of the Form 1.  However, I really need to design more of my own parts and creations.  I'll be posting more 3D printing updates with this regard in the future so stay tuned!
Posted by FastMatt at 9:51 PM 1 comment:

Summer in Seattle has been going pretty well so far, the other weekend ago I went hiking with some friends. We scaled the summit of Mt. Little Si, peering over the edge of the massive 1576 foot (480 m) peak to catch a nice view of the Snoqualmie Valley.  All jokes aside, it was a fun and leisurely hike with some nice sights along the way.  Maybe Mt. Si is next on the hiking agenda, although Mt. Si is a bit of a step up being about 3x taller than Little Si...

In other news, I've made quite a few posts on topics related to 3D printing so it's no surprise that I've been following the market and technology.  Anyway, last year a new 3D printing start-up (MIT associated) called FormLabs unveiled their amazing product, the Form 1, through KickStarter (raising about 3 million dollars in the process).  I was swept off my feet when I saw it--an ultra-high resolution consumer-level desktop 3D printer using stereo-lithographic (SLA) technology.  What makes this printer so amazing is the SLA process.  Instead of melting and fusing plastic coils, the Form 1 uses an ultraviolet laser to "draw" patterns in a tub of liquid resin, the energy from the UV laser causes the resin to photo-polymerize and harden at every position that the laser draws onto.  Therefore, each layer is capable of slightly "blending" each adjacent layer in generating a near-seamless printed product with very little necessary clean-up. 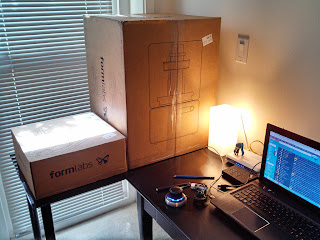 Realizing that this could be a "game-changing" piece of hardware, I backed the project on KickStarter nearly a year ago.  Fast-forward to now, and I finally have the Form 1 sitting on my desktop, and it's a beautiful piece of technology.  However, that's all it is right now as I haven't booted up the printer because I'm still waiting for the resin to arrive which will be in about a week.  Until then, I'm looking forward to making my first print which I'll be sure to discuss in a future update. 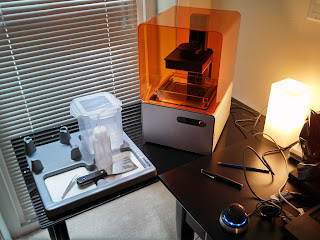 Posted by FastMatt at 6:21 PM No comments: