Here's the featurette video highlighting some of the work done by Kara aka Electric Lady.  It was great working with her at the various locations we explored around Seattle and I'd be happy to do it again.  Will I be doing "featurettes" for other people?  Possibly, it primarily comes down to the cosplayer and whether they are willing to invest the time and effort required to fulfill something like this.  Our efforts are summarized and compiled into the following final video:

I believe releasing this video also marks the beginning of the end, with my intention to; take a break / retire / go on a hiatus / sabbatical / etc.  The length is as of yet unknown and is being done for a few different reasons.  If I manage to attend another convention, hopefully it will be one where my Spectre is debuting.   See you then!
Posted by FastMatt at 9:32 AM No comments:

Will upload the cosplayer feature video tomorrow morning.
Posted by FastMatt at 3:13 AM No comments:

Yesterday concluded the year's Sakuracon event at the Washington state convention center in Seattle.  It was another great year with amazing weather--cool days with clear skies.  Since this year's Sakuracon was nearly a month earlier than last, the event actually coincided with the Sakura blooms around the city.  While there aren't many Sakura trees around the actual convention site (that I know of), the overlap allows for good opportunities to go off-site to take pictures or do video, etc.

I met up with a lot of cool people and had a great time at this year's event.  However, security was quite a bit more obnoxious.

This year I wanted to be a little ambitious and try a few new things with regard to video.  While I made some attempts, the outcome wasn't very successful so I won't be able to provide immediate results.  Looking at my post from last year's Sakuracon I can say that I'm probably as well versed in the culture / scene as everyone else and it's interesting to see that I managed to pull 3 videos from 20 gbs of raw footage.  This year's tally hovered around  32gb of video and I'm aiming to release 2 videos and 1 short feature.

I had the pleasure of getting to work with Electric lady who came out from Arizona and she likewise agreed to participating in my lofty / insane ideas which I greatly appreciated (most people are unwilling to invest their time and energy, though with possibly good reason). I took a few teaser photos from our adventures, here's one: 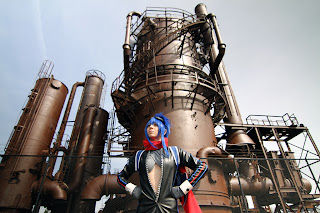 It took some time but I managed to crank out both my first video from Sakuracon and the feature video I did for Electric lady.  However, I'm saving the latter video for the final release.  In the meantime, take a look at release #1:

Posted by FastMatt at 1:07 AM No comments:

The cherry blossoms are now in full bloom and Sakuracon looms around the corner in 3-4 days.  The weather outlook for the event is still questionable but likely to include rain and grey.  I've arranged some plans with people for the con but the majority of the event will be pretty spontaneous.  Lot of things to think about and remember right now, hopefully I don't forget anything.  It'll be an exciting time for sure.