Worked on the legs a little bit, tiny progress--sanded the insides of the legs to remove the fiberglass jaggies and scuffed the outer suface of the legs to prep for bondo.  I picked up the 3M "bondo" variant which is technically called "body filler" as bondo is the name of the company from which the material name is attributed.  I was reminded just how foul the stuff smells due to raw styrene monomer present in the material--it's just horrid.  Thankfully much of the smell dissipates after the material is cured.  One thing I don't really like about the 3M body filler is that the hardener isn't a profoundly different color from the "resin."  One is gray and the other is white so when mixing the two it's pretty much impossible to tell if the material is thoroughly mixed like you can with standard bondo.  The 3M variety does cure to a nice light-gray solid though.

I coated the legs entirely with body filler and tried to contour the surfaces as best as I could in an attempt to minimize sanding time.  It was probably a futile attempt.  I also discovered / encountered a bit of a problem with the legs--after laying up the body filler I tried to "put on" the legs... but they don't fit!!  My foot can't squeeze through the opening now that the model is entirely rigid.  I'll have to improvise a solution eventually.  Cutting a slat in the back of the legs that goes through the entirety of the model or at least partially is one idea that came to mind--the slat can be re-affixed with some kind of latching mechanism and shouldn't detract from the look too much.  Tons and tons of painful sanding is foreseeable in the immediate future. 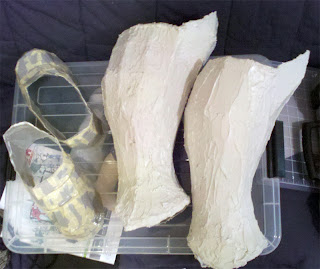