A few days ago I made the long trip (driving) from Tucson to Seattle: a grueling 24 hour, 1600+ mile journey that was split into 2 legs--a 14 hour, 1000 mile leg on day 1, and a 10 hour, 600+ mile leg on day 2.  I mentioned previously that the last time I made this drive was during the middle of Summer so things would probably be a little different this time around, and they definitely were. 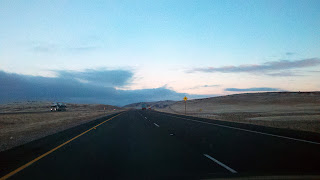 The excursion was largely uneventful and boring driving through the open desert from Arizona to Los Angeles, but then I found things to get really scenic through northern LA with its smooth rolling hills dotted with small shrubberies and I was reminded of how nice and varied the landscape and scenery is in California--my favorite state in the US. Whenever I drive up through California I see how self-sustaining (resource-wise) the state is with its huge expanses of fertile land for growing food, the pasturage for cows and other livestock, the pacific ocean and its fish stock, huge supplies of trees and lumber in the forests of northern California, windy zones with turbines providing power, oil pumps and deposits everywhere, not to mention the large quantities of gold and other precious materials that are present in the mountains.  California could likely operate as an independent self-sustaining country if it absolutely needed to. 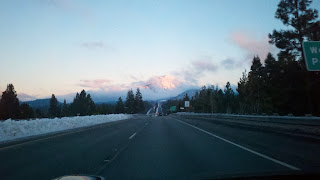 Driving through the heart of California things were again uneventful through a good chunk of northern LA up to northern California where around Mount Shasta the scenery took a quick turn toward becoming a white mountainous wonderland.  Temperatures during my drive through the mountains of northern California dipped to as low as 19 degrees Fahrenheit (-7 C) and the roads definitely showed it with large portions being completely covered and iced over.  Many of the worst sections of road were coated with a thick layer of red gravel (?) which may have included some kind of ice-inhibiting chemical as well (salt, etc.).  The worst areas were those in shadowy valleys which didn't see much sunlight, preventing the road surface from heating up, and giving a nice un-melted icy slick on the surface.  I only experienced 2 "pucker moments" where the rear (thankfully) of the car nearly slid out but I quickly recovered, slowing down till reaching a slightly warmer area.  The scenery from Mount Shasta up to a little past the Oregon border was really nice, and barring the slippery conditions, was a pretty exciting drive. 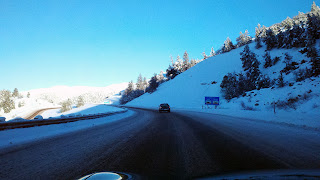 Everything shifted to mostly green (scenic-wise) past this point and the drive was again uneventful into Washington state where the conditions felt a little strange.  It may have been the fact that I was 8 or more hours into the second leg of a long drive, but the snowy white scenery coupled with a white foggy sky and a lack of a definite horizon was throwing off my balance and there were times where due to parallax, I wasn't sure if I was travelling on a flat road or if I was going down a sharp declining road vs an inclined road.  It was only a little disconcerting and I mostly tried to ignore the feeling and get to the next area asap.

Things were familiar on the approach to Seattle and I managed to arrive at my destination and apartment without issue.  The next days were spent "starting over" in life with acquiring consumables and other junk needed to settle down.  Seattle doesn't seem to have changed much in the last 6 months when I was gone.  Though one thing I have noticed is that grocery stores and retailers are now charging for paper bags so the "ban of plastic bags" law must have passed recently.  People at the grocery store seem to be using their own reusable grocery bags now so I guess everyone is trying to be a little more environmentally conscious (people are going to have to do a lot more than that to make a drop of a difference though)--it's a start at least.

My new apartment is a tiny studio unit but I think it'll suffice.  Pretty much the only furniture I have is a desk and chair pictured below as my primary base of operations and from where I'll likely be making most of my future updates and postings. 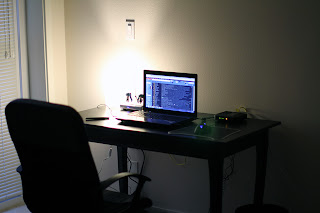