Things have been largely uneventful as of late--I chalk it up to being due to poor Seattle weather and being in the midst of the middle of winter.  One indirectly positive aspect about this year's winter season is having a new car (new cars seem to have the reputation of being pretty reliable) which keeps me from having to stress over whether or not my car will survive the cold season and see the light of the coming summer or having to feed money into it for maintenance and potential repairs.  My last (precious) car, which was an absolutely amazing experience every time I got behind the wheel, was sadly in need of quite a lot of TLC and while it was very reliable, there was always the fear in the back of my mind that something expensive breaking was on the verge of becoming imminent.  Thankfully, I don't think I have to worry about anything breaking for hopefully a while, which is a nice relief (so let fun driving commence!). 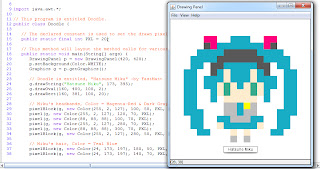 On an unrelated note, I've started learning how to program in Java and I'm enjoying it quite a lot.  Learning a new language is definitely challenging, but it's extremely rewarding when successfully figuring out the solution to a coding problem (using the new language you've learned).  I've only begun to scratch the surface of learning to program but I hope to get better and better with time and hopefully bring some of the project ideas I've written down into a reality.  I recently wrote a cheesy little program which displays a pixelated "8-bit" Hatsune Miku using another program called DrawingPanel. It doesn't do anything except code the graphical representation of Miku but I think it's really cool (because I'm a noob that's never done anything like this before).  I'm sure when I get better at Java I'll look back and be really embarrassed about letting myself post this, but everyone has to start somewhere, right?

All in all, I have high hopes that 2013 will bring some interesting and exciting new things.  What exactly?  I don't even know but I'll hopefully have more interesting updates to provide until then.
Posted by FastMatt at 12:33 AM