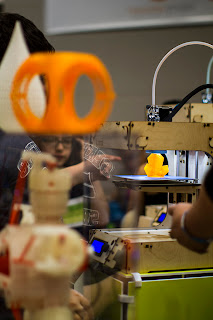 A weekend or two ago I attended the Seattle Mini Maker Faire which was pretty exciting having never attended a Maker event prior.  The term Maker Faire comes from the inventors of the "Make" concept, that being Make Magazine.  Make Magazine is a really cool publication that basically features homebrew / DIY projects typically using creative programmable electronics, lights, and more.  Therefore, a "Maker" would be someone that enjoys "making stuff" or working on projects that involve building or putting together things.

There are two main Maker Faires in the US, one in NYC and the other in San Francisco.  Like all things "Make" the Mini Maker Faire in Seattle is an independently operated / community-driven event put together through the efforts of a large number of people. 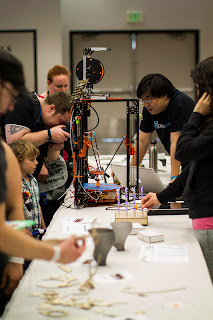 I like making stuff and have a lot of plans for projects / products in the near future so I figured it would be a great opportunity to attend the Mini Maker Faire to see what some other people are working on and to potentially get some new ideas for future projects. 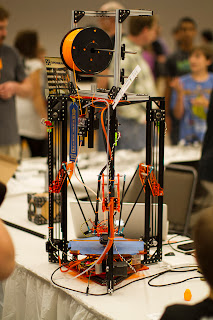 First impressions were that the event is really small (hence Mini right?).  If you aren't spending a significant time at each booth, or aren't participating in some little craft workshop, the whole event can be perused through in an hour or two at best.  Desktop 3D printing was a major theme at the Faire, although all the 3D printers at the event were fused deposition modeling (FDM) printers, meaning they all operated by extruding spools of plastic through a heated nozzle to print 3D objects.  While I'm not really a fan of these kinds of 3D printers, it's always cool to see them in action and see what kind of creations people are printing. 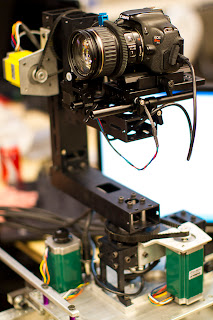 There were a couple highlights of the event which particularly stood out to me.  The first was a fancy multi-axis computer-controlled robotic video slider thing which I can't recall who developed.  However, after talking with the creators they mentioned that they're putting the package together for KickStarter with kits being marketed in the neighborhood of $5-6000.  While that's probably a bargain for aspiring indie filmakers, it's not something that really interested me after hearing the cost.

The other display piece which I really liked was the Magnician's Aquarium, a spectacular magnetic field audio visualization exhibit.  Basically, a set of magnetic coils are suspended within the aquarium and a (soapy) water suspension of nickel particles are added.  An audio signal is amplified (pumped current) and then fed through the coils which generates a magnetic field.  The nickel particles react to the magnetic fields around the coils and "dance" to the music played.  I was told the signal running through the coils is inverted every 5 seconds as well to keep things more visually dynamic and exciting.  This project is pretty brilliant and has a lot of potential as a commercial unit.  I'd like to make a miniaturized version of my own but I'm not sure if I'll be able to find the time to do so. :( 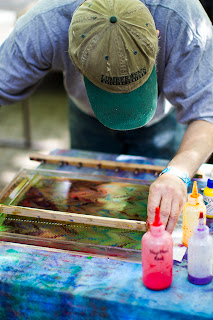 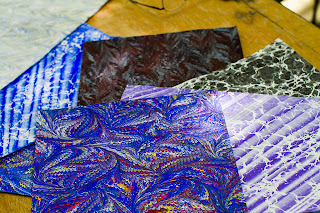