Jewelry For The Masses


As mentioned in the previous post, a friend recently inquired as to whether I could make some 3D printed jewelry--with the answer being, of course!  I received a link to a pair of earrings sold by Nordstrom--a set of Lucite® (aka Plexiglas®) earrings in the shape of an abstract teardrop, along with a request to replicate the design if possible.  Not being one to pass up a fun challenge, I accept the request and began the reproduction process.


Without having a physical set of the earrings in front of me to accurately measure dimensions, I roughly gauged the earring's length based off a guesstimate of the length of the model's ear in the photo above and came up with a value of ~50 mm.  Thereafter, the first steps were to obtain the rough dimensional constraints of the teardrop shape (as seen above) so that everything could be drawn to scale in the CAD software.  Drawing the model in CAD was a learning process and took several iterative attempts to recreate the curved surfaces properly.  Once the general teardrop shape was created, a plan had to be devised with regard to how an earring loop would be attached to the top of the earring--in addition to needing to buy the earring "metal bits" as well.  This required making a trip to a local DIY jewelry craft shop, Fusion Beads, here in Seattle.  The trip was an interesting experience, and a little awkward as I had no idea was I looking for other than to describe the desired pieces as "metal earring bits that go through the ear," which I later learned are simply called "earring loops" which I properly referred to earlier.  After picking up the necessary supplies I discovered that the small eyelets that would inset into the teardrop had extremely narrow metal driving rods (~0.6 mm in diameter).  As far as I could recall, drill bits smaller than 1 mm in diameter don't practically exist. 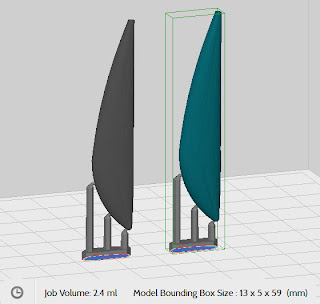 However, instead of drilling into the top of the earring, the hole could simply be drawn into the CAD drawing and printed without requiring any modification.  Getting the holes to print properly required several iterations of changing the hole diameter and earring wall thickness.  A related minor issue that had to be overcome was that the 3D printed earrings had very small hole features which would fill with resin during printing and wouldn't get properly flushed out when cleaning the completed prints.  This proved to cause problems when trying to insert the eyelets into the earring bodies.

Finally, the earrings were attached to earring loops and project was declared to be successfully completed.  Hopefully the future owner will get some good mileage out of them.

Also as mentioned previously, the full-scale Möbius bracelet was also completed, lightly sanded, and delivered to its happy new owner.


It seems like more 3D printed jewelry and accessories may be on the horizon in the future.  I recently designed a pair of sunglasses (on paper) and I'm thinking about fleshing out that project by prototyping a set if I can find the time.  Hopefully that will be one the next projects that I feature.
Posted by FastMatt at 3:03 AM