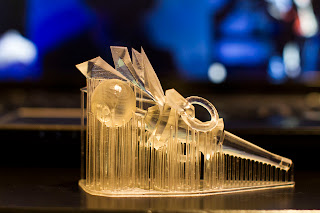 The latest 3D printed object I created was inspired by attending PAX Prime, one of the largest gaming conventions in the world, which took place here in Seattle last weekend.  The last time I attended PAX was back in 2011, and the event has grown substantially every year since--it being one of the most fun and entertaining conventions I've ever attended.  I spent a good amount of time at the Wacom booth (Cintiqs on display) and met a lot of extremely talented artists and 3D modelers and watched them perform their craft in real-time.  They were able to perform some amazing "wizardry" turning simple spheres into complex organic creatures in ZBrush and Mudbox--it was definitely really impressive and inspiring to watch. 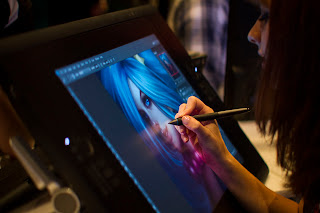 As a result, I wanted to recreate an object from a game and picked the Blueheart Spotter vision ward from Valve's DOTA 2.  The vision ward is based off the aesthetics of the Crystal Maiden which is sort-of a frosty / ice crystal-like character in the game.  As a result, the ward has a lot of crystal-like features built into its design.  I recreated the model as best as I could from a simple photo reference and then sent it off to be printed on the Form 1.  After printing, the model was lightly-sanded in areas to smooth out the support-attachment bumps, washed, and then photographed.  The printed model prototype is only about 5 inches tall.  I'm thinking about printing a larger scale version with a base plate / stand and wiring it with an arduino-controlled LED lighting setup, in addition to a transparent colored paint job to better recreate the ward aesthetically.

PAX was an incredibly fun event this year and one of the highlights was getting to play a really creative and innovative game called Johann Sebastion Joust, which involves up to 18 players each holding PS3 a motion controller wand to move smoothly and steadily, as sudden movements of the controller will knock you out of the game.  However, it's a "last man / team standing" type of game so players must "joust" and attempt to "jostle" the controller of another player while keeping theirs' steady to win.  All this is also affected by the tempo of the music that's playing in the background.  The game is brilliant, hilarious, and insanely fun.  I believe a version of the game along with a few others were funded through KickStarter recently.  The best way to fully understand the game is to check out the video below.  I hope JSJ really catches on and becomes more popular.

Also while at PAX I randomly bumped into some YouTube celebrities, Jimmy Wong & Clinton Jones, from various YouTube channels but probably best known through Freddie Wong's channel--Freddie being regarded as essentially the "face of YouTube."  They were a great bunch and it was awesome to get to casually meet them in person too. 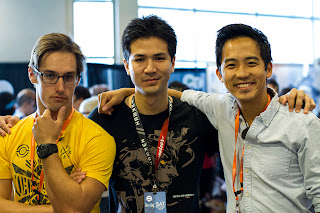