Last weekend I had the pleasure of attending the World Maker Faire in NYC and participate in various other activities while visiting friends in the area.  It's been a while since my last visit to the East Coast and I've been long overdue to visit so I used the Maker Faire as a prime opportunity to "kill two birds with one stone" so to speak and make the most of my visit.

I wrote about my attending the Seattle Mini Maker Faire earlier this year and how small the event was...  Well, the World Maker Faire in NYC was quite the opposite to put it lightly, the event was absolutely bustling with exhibitors and attendees.  The "maker movement" is definitely growing by leaps and bounds.  One thing that wasn't in short supply at the Faire was 3D printing-related "stuff."  The event was seemingly dominated by 3D printers, technologies, printed objects with very little spread in variety of other Maker-related things.  While a lot of individuals seemed to be overwhelmed with all the 3D printing stuff, I believe we haven't even come close to reaching the tip of the iceberg with regard to the growth of 3D printing being a mainstream product--next year's World Maker Faire will probably have an even larger 3D printing presence.

For example, the patents to create 3D printed METAL parts using laser sintering processes are expiring in 2014 which will likely give birth to desktop metal 3D printers (probably through KickStarter) shortly.  Personally, I think metal 3D printers should be left to industry consumption as they are a potentially incredibly dangerous technology for a variety of reasons, but we'll see what the future holds!

There were a lot of cool things to see at the Maker Faire, and a lot of cool gadgets and toys to purchase or pre-order.  I'll let a select few pictures do the talking:


While staying with a friend, we went on a variety of fun adventures, like visiting the MoMA, ate at Japanese restaurants, checked out various sights & popular tourist destinations, and more.

Also, as I mentioned in the last post I said I was going to paint the Slardar-headphone covers.  The completed results are below--hand painted using acrylic UV-fluorescent paints.  I'll try to get a photo of them under a UV lamp to show off their glow! 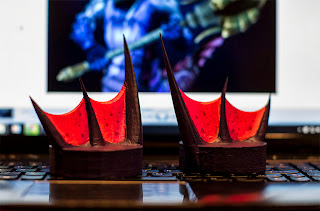