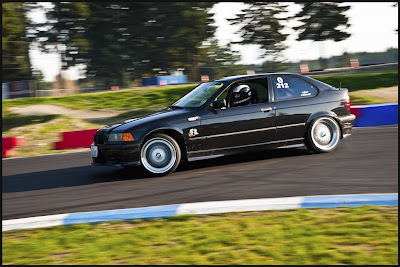 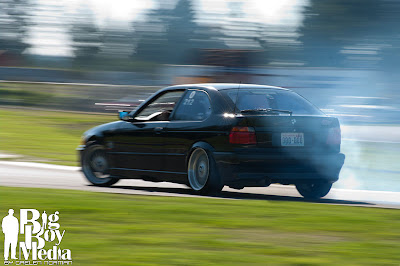 Had an amazing time drifting at Pacific Grand Prix today. The car performed beautifully and everything felt great. From the start things were a little hairy as it's been a while since my last event and I spun a few times here and there. Had some issues figuring out how to clutch-kick properly and under-steered a lot--and going off the course a bit. At the edges of some parts of the track there were these white raised speed bump bits which tore my car / wheels up a bit. The brand new wheels suffered a few nasty gouges from them unfortunately, it's mostly cosmetic stuff though.

As the day went on I started to get a better feel toward initiating drifts by clutch-kicking and put my car through a ton of abuse. The new differential performed amazingly as well and made some really weird sounds during intense drifting action--hopefully I won't need to have the diff rebuilt for a looong time as I'm quite poor at the moment.

Then towards the end of the day I was feeling pretty comfortable and began to really feel the cars movements and was able to use weight-transitions to link multiple turns together. Once I felt that it was like my eyes were opened to new possibilities. I had to do the entire course in 2nd gear and the car had no power in third which limited my ability to throw a good smoke show, and I wasn't comfortable using the e-brake yet.

The brand new tires I had on the rear almost lasted the entire day, I swapped the rears out once they started to show some cords. It looks like there will be quite a few events throughout the winter, at least one per month, which is great except I'm a bit wary of having to flush my cooling system with distilled water before each event especially when it starts to hit freezing temperatures--we'll see how it goes. Pictures soon to come from media at the event hopefully!
Posted by FastMatt at 7:25 PM