As mentioned in the previous post, and alluded to in post even earlier, I managed to pick up a replacement to my old beloved car.  What could possibly be suitable enough to replace that car?  Not too much, although there happened to be a fantastic driver's car that was released mid-2012 which I had been following with interest for a long while, though at that point in time I had never considered the possibility of owning one.  With "new years" come "new beginnings" and in this particular case, a new car.  The vehicle I managed to procure is the (Raven) Scion FR-S, otherwise also known as the Subaru BRZ, or in Japan, the Toyota FT-86.  I was unsure that I could ever own a Toyota, but the FR-S was just too good of a car to resist, being lightweight (2800 lbs), FR platform (front-engine rear-drive), OK power (200 hp), and fairly economical (4-cylinders).

Having had the car for a couple months already and becoming pretty familiar with it's handling as a daily driver, I felt it was a good time to kick things up a notch and get better acquainted when things are taken to the limit--with a low-key gymkhana / drift event.  It's been a while since I've last been drifting, but it's kinda like riding a bike, you never really forget the basics.  However, in this case it's almost like going from a bicycle to a step below a unicycle.  I'll put things in simpler terms...  this car is hard to drift.

There are many reasons why.  First, the power is OK, but the 4-cylinder motor produces little torque (151 ft-lbs at 6600 rpm).  If I suddenly slam my foot to the floor when applying gas, nothing happens, the car just slowly accelerates.  If I were to do the same in my old car, the rear wheels would quickly break traction and slide (like the beast that it was).  Second, the car lacks steering angle, at full lock I can't do a U-turn in a normal 2-lane road like I could with my old car (this is helpful for "catching" drifts).  And thirdly, the FR-S has "electronic active steering" which means the steering system is attached to an electronic assist system which modifies the steering ratio based on specific situations / speeds.  This is perfectly fine for slow-paced / daily driving, but during fast-paced lock-to-lock maneuvers while drifting, the steering feel is a bit strange.  It's manageable & learn-able but it's still just weird and a potential handicap until the disconnected feeling is mastered. 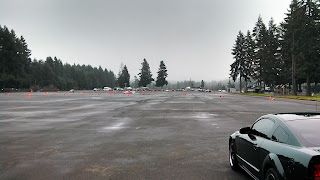 Regardless, my first driving event with the car was a success.  I got to experience what the car feels like at the limit and found out that the car is very "grippy," you have to work really hard to get the car sliding well.  My first run of the day was a bit laughable--I didn't know how to turn off the traction control so I looked like a giant derp spinning out over and over as the car cut the throttle each time I tried to initiate a drift.  Lo' and behold I needed to press and hold the traction off button for five seconds till some lights in the dash appeared.

While drifting the FR-S is incredibly difficult, I did manage to pull off a few decent drifts and had a good time behind the wheel.  There were a few other guys at the event with the same car who were having a lot of trouble drifting as well.  But, the car is new, the drivers are inexperienced, and things will get better with time so I'll see how things progress later in the year.
Posted by FastMatt at 7:07 PM