Since coming back to the US, I've been a bit slow with regard to re-accumulating "stuff"--things like furniture, everyday items, etc.  IKEA is typically a good one stop solution shop for this kind of problem and is where I perused for certain necessities.  In fact most all the big "furniture" items in my tiny apartment are from IKEA, first a desk and chair, and now a couch and coffee table.  While many of the household items from IKEA have a somewhat sought-after "modern contemporary European" look or style for an arguably inexpensive price, I can't help but notice how cheap and disposable all their goods are.  It's like everything is a giant façade or glittery shell covering over particle board and recycled plastic.  Sure it'll look "decent" for a little while, but any use will reveal its true cheap interior.  I'm not sure where I'm going with this rant, but I just wish there were higher quality yet inexpensive furnishings available from an alternative supplier.

On a somewhat related note, a friend of mine finished furnishing his swanky high-rise apartment in downtown Bellevue and one of the bits he ordered was damaged on arrival.  He was sent replacements without having to return the damaged goods so I offered to take it (a nightstand) off his hands.  It's a nice solid wood piece which looks to have been dropped, but should be fixable with a small investment in a couple tools.  Regardless, I got to visit his amazing new apartment and it's like something from out of the movies.  It felt like how I'd imagine it to be if you were to "permanently" live in the fancy suite of a high-class hotel.

That isn't to say that I don't have a view of my own, I sort of do, at my current work place.  I can't just look out the window of my office to get it, but if I go up a few floors of my building there's a small vista point which provides a decent view of parts of the university campus and West Seattle--not quite the same, but it's something at least!

Last weekend I went to the local zoo with some friends which was my first time going to the zoo in Seattle (after being here for 5 years).  It's a decent zoo with; a good variety of animals, the smells weren't too excruciating, and it wasn't too crowded (although it is still the middle of Winter).  There wasn't too much of a selection of my favorite animals (lizards & geckos) but that's typical fare for a zoo--people seem to want to see the big stuff from Africa like elephants, giraffes, and lions.  I'd have to go to an exotic pet shop to get my fill of cute geckos and lizards if need be.

Finally, I found a cool shot of me in action (drifting) from the gymkhana a couple weeks ago.  Looks like I managed to get a little sideways in the shot.  Props to the photographer! 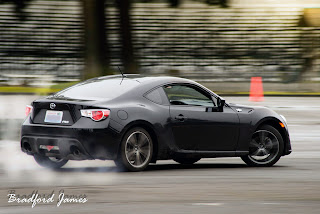