The next day the morning was wasted since the engine leveler we ordered from NAPA never showed up, the employee there said it was never ordered but would call the order in and have it by 3pm. 3pm came around and guess what happened? NO LEVELER. We were furious over how inept and useless everyone at NAPA was. I had my money refunded and decided to try to drop the motor in without the leveler...
Turns out it IS possible, though really tricky / difficult, bent some part of the firewall a little bit I think but shouldn't be a problem. 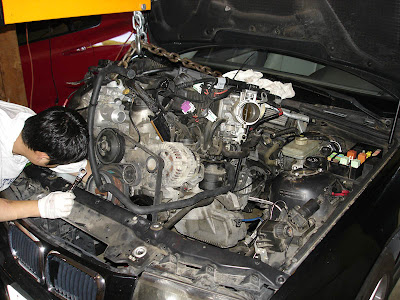 It was tricky getting the oil pan around the steering column, had to remove the passenger side motor mount arm to sneak it around. It was fairly smooth sailing past that point barring a struggle to get the engine aligned with the motor mounts. 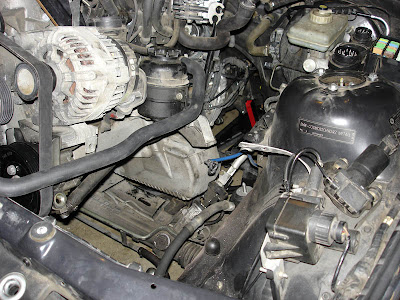 The rest of the time was spent reconnecting and reinstalling things. There was a freak out over whether the driveshaft would attach to the transmission since the new setup is a bit longer and we figured out that the driveshaft could be disconnected from the center bearing, attached to the transmission output flange, and then reinstalled without any issue.
The shift linkage is kinda wacky though, the shifter hits the plastic shifter surround when going into the northern gears (1,3,5, etc.) so I might end up removing the plastic to save some weight and get over this issue (sacrificing looks for utility).
There also was a large round connector on the wiring harness which didn't connect to anything which I started to worry about. However, after doing some research it seems to be a connector for the ASC system (traction control) which I won't be using anyway. 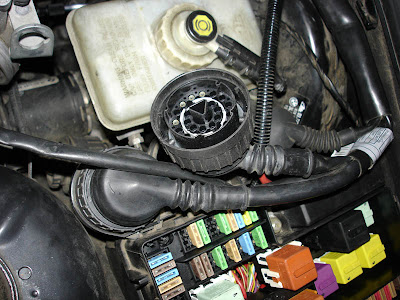 Tomorrow should be the last day of the project and will consist of the following approximately:
Install radiator / cooling hoses, install exhaust and associated connectors, fuel lines, etc., torque down all the nuts and bolts in the drivetrain, doublecheck the wiring harness to make sure positive cables and ground cables are going where they should be, replace EWS II unit, get and install power steering return hose, fill system with fluids (power steering, coolant, oil), reconnect battery, insert key, hope for the best. Shouldn't take very long to accomplish all this so I expect to be up and running shortly if all goes well! 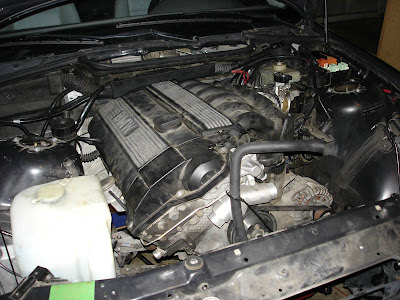