So a bit more money drained from my negative account... But, my bad O2 sensor was replaced, and now there's no check engine light!!! I went and got my emissions tested after and easily passed. For some strange reason the emissions attendant person asked me if the car was a 4-cylinder or not. I said no, I did an engine swap and then she asked me if it was a 2.5 or 2.8L motor. Apparently she just input my car into their system as a generic 328i or something. Whatever though, I passed without any issue so I should be good for 2 more years.

Also, I had a bigger rear diff installed (4.10 gears) to handle the increased power. The old small diff was making a pretty loud whining noise at high speeds although a bit of that noise can probably be attributed to the solid diff bushing that I'm using as you can still hear a bit of driveline noise with the new diff though it's no where near as loud. The new diff came from an automatic car and it looks great inside and out so it should last a while hopefully. 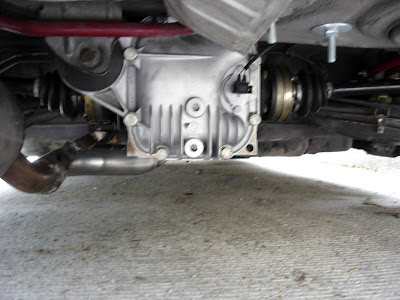 New strut-tops were put in that I mentioned in an earlier post. Since a lot of caster is needed to get the steering to return on its own while driving I had new M3 strut tops installed which just from looking at them seem to be a huge change. Hopefully it should make drifting a lot easier and more fun. You can see in the picture below the strut position is shifted / pushed back toward the rear which causes the front wheels to be angled foward more (this is what more caster is). I've included a picture of what the stock strut-tops look like and you can see the shock is right in the center of the tower--it's a pretty significant difference. 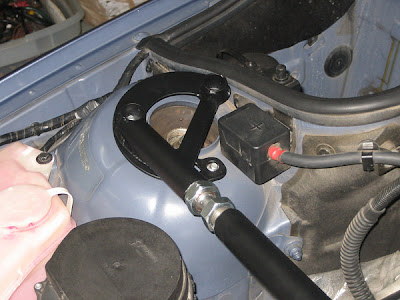 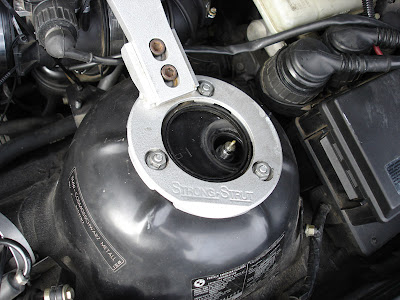 You can't really see too much of a difference from the outside though I didn't document any before pictures to find out. I think the wheel might be rubbing a little with the increased caster at full lock but I think I'll just have to deal with that. 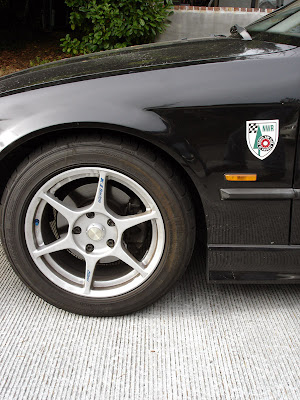 With the new diff in and my clutch nearly broken in I tried some quick acceleration "tests" for fun and the car does have a bit more acceleration compared to stock. However, the rear didn't lose traction like I would have expected it to due to the increased power and torque. Either my car somehow gained a huge increase in traction magically or the weight of the battery, new diff, and old diff in the trunk (couple hundred pounds maybe) was helping to keep the rubber on the road. I'm hoping it's the latter and that when I remove all the garbage I have in the trunk I'll be to light the tires up more easily. I mean it's got more power! There's no reason I shouldn't be able to do that! I could do it with the old 4-cyl motor! Here's a shot of the rear suspension with all garbage in the trunk (groceries too), looks like the rear is lowered by an inch or so. 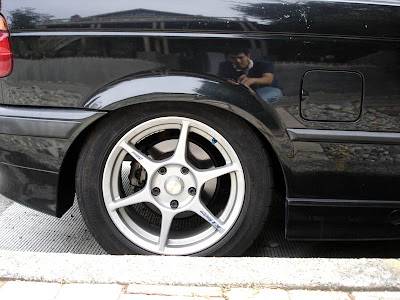 And finally, here's a shot of the complete engine bay. The nasty white residue is hot coolant that sprayed everywhere because for some reason the radiator cap popped off while I was driving. I really really hope I don't have anymore cooling issues with this car... I need to figure out how to get an electric fan wired up to the car before the next drift event. 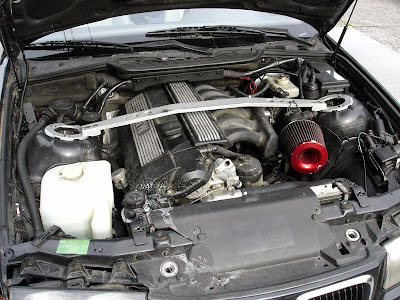 The car is basically all set now except for general maintenance stuff. I need to pay off the rest of the swap costs and then I have another project in store which should be a lot of fun (in the looks department as opposed to performance).
Posted by FastMatt at 5:44 PM