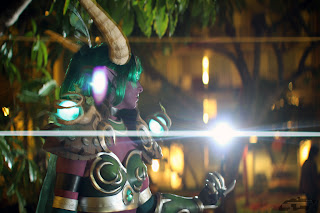 This past weekend I attended Anime LA to do a little video work as it's been quite a long time since my last project.  I was only present for a couple days but still had a good time meeting some really cool people, checking out awesome cosplays, and discovering YouTube celebrities.  It was a pretty wild event to say the least, with people partying round-the-clock and lots of interesting sights around every turn.

I went to the event pretty ambitious with lots of ideas and goals and while I wasn't able to achieve most of them I tried to make the most of my time.  The convention was confined to a very small-area packed full of people with the general surroundings being somewhat unfit for extensive varied video work.  I wasn't able to shoot video with everyone I'd hoped and there were those that I wanted to shoot with but could not find them / they would disappear in an instant.  As a result, I didn't get much footage from the event which I'm regretful over.  I mostly seemed to shoot video of friends or friends of friends and a few people that were already being singled out by photographers.  My goal is to try and be more proactive in capturing more people.

I collected footage for at least 1 video, maybe 2 but that may be pushing it we'll see.  The embed is below: