So the current state of the Spectre project is that progress on the shoes are currently on hold for now.  I think the current plan is to cut out and remove the pep/fiberglass material and build a similar shape out of sintra (pvc sheeting) that's spaced out from the shoe itself.  Once that's done and looks good I'll begin work on smoothing out the exterior of the shoes.

I've also been slowly trying to smooth out the legs more and more.  I found there to be a lot of holes in the body filler that require filling with apoxie sculpt and the entire process is a gigantic pain.  I don't know if it's my bad technique but I find the body filler to be extremely sticky--setting way too fast.  If I try to smooth out an area that I've applied material over, the filler will catch on my spreader as I make a second smoothing pass and mess up the surface.

I also nearly forgot to add the raised detail slats to the sides of the legs--so I'll do that, make some finishing touches, and then determine where to cut slices out of the legs so that I can actually wear them.  It's gonna be pretty nerve wracking making cuts after I've spent so much time getting the legs to this point.  Not sure how I'm planning to fasten them to my legs either, might need to make two cuts or a single giant cut through the entire backside. 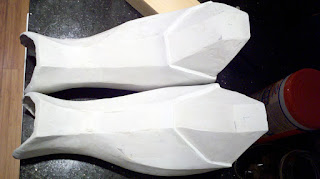