It's been a while since I've been able to work on my cosplay stuff due to going to ALA last week, work stuff, and the horrid weather here in Seattle.  It's been snowing a bit here but I can't sit through the entire season without making any progress--so I'm taking baby steps.

Last I left off, I was working on the Spectre's shoes and I mentioned how well the pepakura model fit to some dress shoes I had laying around.  Well, I went and filled the gaps with some flexible expanding foam (great stuff by the way), let the foam cure, trimmed the excess, and went to try putting them on... which is when disaster strikes.  Apparently binding the pepakura model to the shoe and reinforcing them together made the "tongue" of the shoe completely rigid, meaning there's no way my foot would go in unless you were to slice an inch off the tops of my arches.  This isn't cool at all because they're starting to look cool, or I should rephrase, they're starting to look like something at least.  I tried shoehorning my foot in, but the rigid tongue / fiberglass combo was cutting into my foot.  I eventually pried hard enough and got my foot to squeeze in after cracking the pepakura model in several places.  I'll need to somehow repair the top bit and make it bigger without making the underlying shoe rigid--hopefully it's doable. 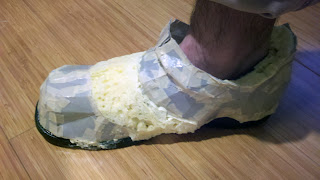 I also spent some time focusing on smoothing out 1 of the legs (the better one) and I think that maybe it's nearly there (the other is hideous right now and will be worked on later).  It's feeling impossible getting the thing perfectly smooth and round and I feel like I might be wasting my time trying to do so.  So I'm hoping to get it a little better than how it's picture below and then prepping it for paint as I believe the painted finish is pretty much 90% of what determines the quality of a piece as a perfect prop with a mediocre paint job will look infinitely worse than a less-than-perfect prop with an outstanding paint job. 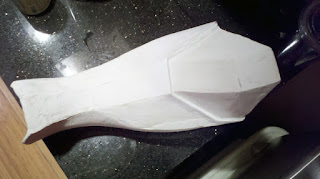 That just leaves into question whether I have any painting skills... I dunno, lol. 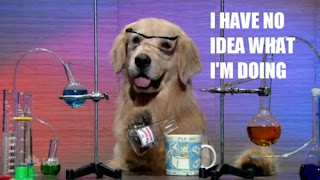