It's been about 3 weeks since I've arrived in Germany and I'm slowly becoming more acquainted with it, kinda.  The city I'm in is really quite small and I'd say it's not really a touristy destination at all--with its grungy feel.  It's hard to get a grasp of my surroundings as I'm at the mercy of public transportation--of which I'm not really a fan.  I long for the moment when I can own a car again and experience the freedom and fun that driving provides.  It'll probably be a couple more months before that happens though.

A couple observations and interesting things I've noted in the past week:  it was lunchtime and I went to the cafeteria at work as per usual except there was a sweet smell of cinnamon in the air like there was some kind of new dessert being offered.  It wasn't a dessert though (or was it), it was one of the main entrees for the day, a giant platter filled with "milk rice" topped with cinnamon and sugar.  It was pretty unexpected that most of the German workers were getting this dish of what seemed like a dessert and solely eating that for their lunch.  Perhaps I'll give it a taste if it makes the menu rounds again although I don't think I could handle an entire giant plate of it. 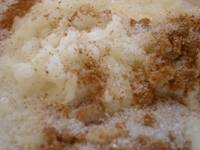 Other food items that are commonplace aside from the various typical meat and cheese related items are fruit-flavored things, especially apples and "exotic" or passion fruit flavors.  Apple juice, sparkling or otherwise is seen as frequently or is as commonplace as a Coke or Pepsi here.  Along with the fruit theme, there's an orange / coke soda mix which is really popular over here--one variety is called "Mezzo mix." It's not too bad--doesn't taste that far off from a normal Coke though. 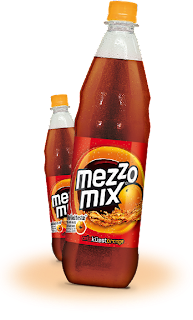 One particularly nice thing about "drinks" here in Germany is the rebate system that exists for essentially every bottled or canned beverage.  In grocery stores there is an automated receptacle where you can return your empty bottles and cans (for recycling I assume) for a 25 euro cent rebate per each.  That means a 6-pack of any-size soda will net you 1.5 euros back on return.

Bottled water in America costs more per gallon than gasoline.  Here you can get a liter of mineral water for 45 cents after returning the empty container.  A can of orange Fanta? 45 cents after rebate.  A 20oz bottle of sprite or coke?  About 80 cents.  The rebate even applies toward expensive drinks like Red Bull and more.  As a result, you can buy crates of drinks at the grocery store which are very cheap, just bring back the empty bottles for your refund.  However, the rebate from what I've seen isn't redeemed as cash but used for your next purchase at the store (credit).  It's a pretty great system which encourages recycling by imparting an inherent value to containers and pricing the beverage closer to it's actual value.  It's unlikely that this system will ever get picked up in America but one could hope.