I'm in Germany, it's late at night, and I'm writing this post from the temporary student housing sub-let that I signed for before I got here.  Sounds good?  Well, it's cheap, and... that's about it.  A German college student went off elsewhere (on holiday perhaps?) for two months so I've paid to inherit his quarters in the meantime.  As a result it doesn't quite feel like home and it somewhat adds to the anxiousness that's crept in within the last half-day that I've been here.  The gravity of my decision to move finally started to sink in after arriving in Frankfurt--that I'm really taking a blind-folded leap of faith as far as my future is concerned--having never been to Germany, let alone Europe.

The days preceding this quest were spent saying sad farewells and goodbyes to friends in Seattle, followed by rigorous apartment cleaning, clearing, and packing.  Four years of accumulations were eventually funneled down to 3 luggage bags and a carry-on.  This process was a complete nightmare and I hope I never have to repeat it and will strive to keep the quantity of my possessions to a minimum until I know I'll be settling down for a while.  I managed to catch one of the first non-stop Seattle to Frankfurt flights which are offered by Condor airlines for a pretty good fare (~500USD each way).  Things I noticed about my flight to Frankfurt; most of the people I was flying with weren't actually going to Germany but were transferring to other locations, Condor's plane is small for an international jet (767), the flight time was shorter than advertised at around 9 hours (going through a North-Eastern diagonal of Canada, past Greenland and the arctic to hit Frankfurt from the North).  Flight positives: "cheap" fares, received a random free seating upgrade from economy to premium which provided more space, free alcohol if you so desire, and a faster exit as a result.  Flight negatives: no personal in-seat TV-screens or monitors, tiny overhead bins, Sarah Jessica Parker movies, and water condensation dripping from the "roof" or ceiling of the plane onto seated passengers below. 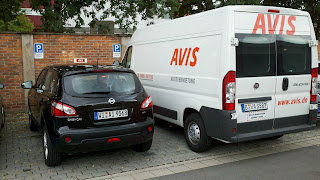 After lassoing all my baggage and meandering through the Frankfurt airport maze, I managed to rent a car with GPS to get down to Mannheim where my "apartment" is located.  Being able to drive a manual-transmission (standard) car in Germany on the autobahn was pretty exciting although it was a giant sensory overload trying to figure out where to go, how to operate an unfamiliar vehicle, and keep everything together on the road simultaneously.  The car I drove was a 150hp turbo diesel beast (lol) of a Nissan "Qashqai" (???) equipped fairly well with a 6-speed gearbox.  Driving on the autobahn was fairly relaxing and manageable (though I have a bit of experience driving at high-speeds on the track) and cruising speeds as high as 180kmh were achieved during the short journey.  I arrived in Mannheim and was taken to my housing and shown a few landmarks and key locations along the way.  The Mannheim that I've seen thus far seems perhaps only slightly ghetto with a slathering of distributed graffiti (tags).  However, these are just the initial impressions and observations.

There's more to come, including a discussion about German toilets in a later posting.
Posted by FastMatt at 4:07 PM