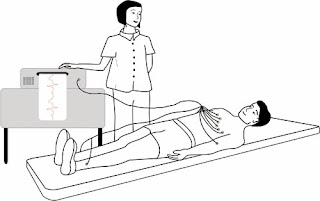 My first week at work is complete and it's been an exhausting ride--waking up at 6am and getting home from work at 6-7pm.  Hopefully things will begin to settle down in the future but an interesting curve ball was thrown at me today in that me and my coworker were given company medical examinations to assess our "pre-work" health I assume.

It's the first time I've had to go through something like this and it was quite an interesting process in which I began to feel like a lab rat being examined to determine if it's space-worthy.  Everything began with the basics: a full-range of eye exams, height, weight, then a lung-volume measurement (?) test.  Following that, they hit me with the needle and drained me of my blood which was the first time I've done such a thing.  It's shocking to see how fast and forceful the blood pours out of the needle, filling up two large vials in a matter of seconds.  That experiment went fairly well and perhaps I'll finally be able to find out what my blood type is when the results are posted.  Later we had to pee in cups for a drug screening, followed by a slight disrobe on a medical bed whereupon I was spritzed with contact solution and what seemed like 100000 octopus suckers were attached all over my body to obtain an EKG.  What was left was a final one-on-one medical examination by a doctor in his office.  The whole experience was a bit distressing in that we were given a sheet of paper with a list of tests and locations in German--after going through each test, it would get a check and we would be directed to a new location with an unknown fate.  The entire time I was unsure how far the exams would go but thankfully they didn't go as far as to include rectal screenings.

Evidently these exams are completed fairly often to ensure the health of the workforce.  I suppose it's a nice thing to constantly keep tabs on your own health--just another thing that will take some getting used to.

That's all I want to mention for now--as a bonus, here's a picture of the thing that watches me while I sleep every night.  Yeah... 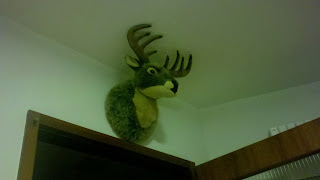