Last year I learned about Gamescom, a gaming trade fair / expo (that only started 3 years ago) held in Cologne, Germany every year--which quickly became the largest gaming trade fair in the world with over 275,000 attendees last year.  Gaming conventions are pretty wild events as they are entirely focused on a genre which has but one sole purpose: entertainment.  They are hype-generating machines for up-coming games, with demos, tournaments, shows, eye candies, goods, and swag to be had.  I've seemingly made it a habit to attend any local game trade fairs if given the opportunity and have been to both PAX in Seattle, and the Tokyo Game Show in Japan (2nd largest I believe).  The last big show I've yet to attend is E3 in Los Angeles, but I'm in no real rush to complete the "king's quartet."

Initially I had intended to spend the weekend attending Gamescom, but after 1 day of dealing with the mass of crowds, incessantly loud noises, and long queues, I had my fair share of the event and went back home in the evening.  Let me give you a feel for the ocean-like crowds that had to be navigated and dealt with: 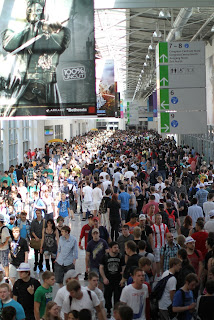 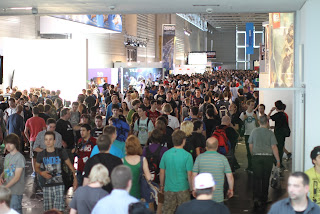 Gamescom is massive.  Both TGS and PAX feel like mere fractions of the size and span of Gamescom (a 5-day convention).  The exhibition center in Cologne is so unbelievably big it's hard to imagine or fathom except to say that the halls span over 3 million square feet (which is pretty much incomprehensible).  One interesting cultural aspect present at this German convention was "beer" which was readily sold and consumed throughout the premises. 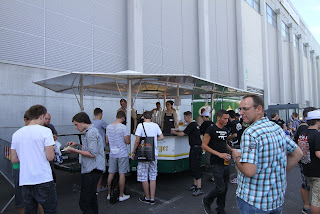 Tons and tons of exhibitors and games were being shown--with something for everyone.  Blizzard had a big presence and the next Starcraft 2 Heart of the Swarm expansion seemed pretty great which is something I'm looking forward to at least.  The Japanese mobile phone gaming company, GREE, was exhibiting games in full force.  Prior to this event, the company was seemingly unheard of.  Though it seems the company would like to tap into the foreign mobile app market with their products--I imagine we will be seeing this company quite a bit in the future if this information is true. 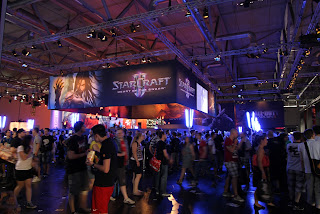 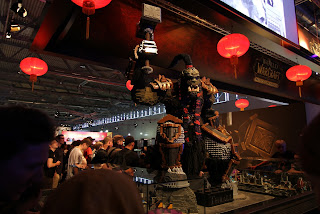 So many things were going on throughout the event: musicians performing, tournaments being held, BMX and skateboard half-pipe shows, cosplay contests, etc.  The entire event was overwhelming and a complete sensory overload. 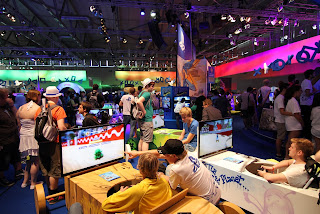 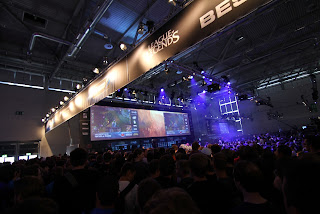 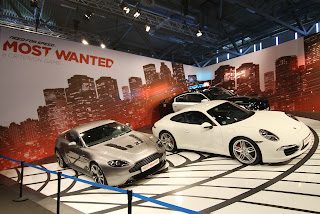 I did manage to meet up with some friends from the Netherlands to share in all the craziness.  One thing that really energized the crowds was to tempt them with free stuff--I did my share of yelling for stuff and managed to score a copy of Farming Simulator (in German) which was being thrown into the crowds.  I may have had a slight height advantage over the people surrounding me, but regardless of whether that was the case, I reached into the sky with my grabbing hand which towered like Mt. Fuji amid a flurry of child-like grasps.  All I needed was for a copy to be thrown in my general direction and I waited patiently like an angler stalking the day's catch.  Just when I thought I wouldn't get a chance, a developer tossed a copy straight toward me... I was wearing my Jordans and summoned all their jump-enhancing powers for the single chance to take this game home.  It was a success, I managed to skillfully snatch the game in mid-flight and celebrate with friends in achievement...  I really didn't want this game...  Yay... farming... 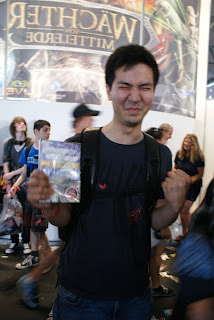 All in all, Gamescom was pretty fun--but I think a single day was enough.  Perhaps if I really wanted to play a big list of different games and had a specific agenda, then more time could be warranted.  Will I go again next year?  I think I probably will, but a day will be enough. 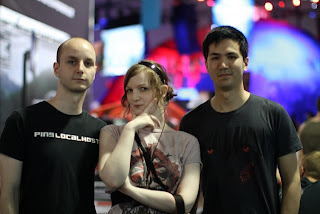