Today was caterpillar day for me it seems. It started off with finding a caterpillar crawling on the ground in between buildings at work. It seemed a bit weird as caterpillars usually hang out on the plants that they feed on. Later on in the day I spotted a couple more of the same caterpillars on some viney plant and harvested them as well as some of the plant.

Then I really hit the jackpot while riding my bike home from work, I saw the most monstrous caterpillar ever crawling across the asphalt road and immediately stopped to harvest it and looked around at the plants on the side of the road--JACKPOT!! Tons of monstrous caterpillars everywhere. My hands were full of the giants and they were really hungry because they were super restless and some were trying to nibble on my fingers as well. A grandma came out of the apartment next to where I was and asked me what I was doing and I just pointed to the mass of writhing caterpillars on my hand / arm and she got excited and was saying how there's a lot I have a lot of imo mushi. I just nodded my head as I couldn't understand everything she was saying and didn't want to give that away. 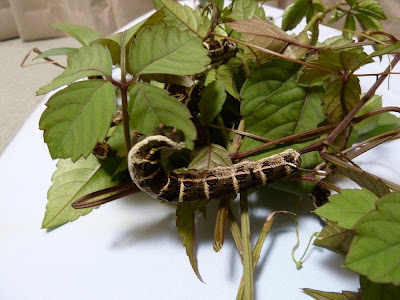 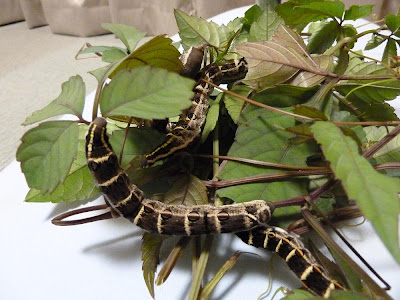 I harvested more of the viney plant and took everything home. The caterpillars settled down and started feasting once I put them back on the leaves. Then I made a dash to the supermarket to buy a small bug cage for around 300 yen. I'm not sure what kind of caterpillar they are but judging on their massive size and the horn on their tails that they're probably some kind of moth larva. I'll know for sure when one starts to pupate. 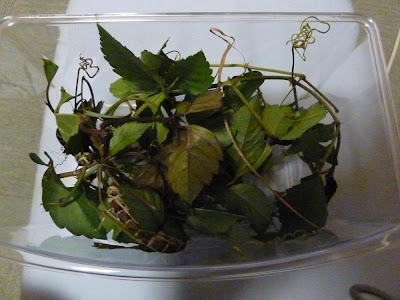 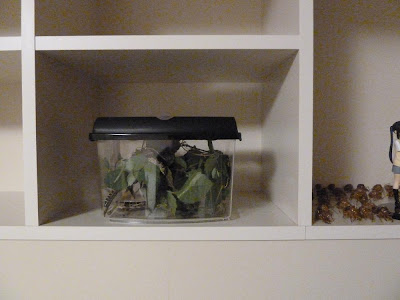 Edit: After doing some research I've identified the caterpillars to be of the Impatiens Hawk Moth or sesujisuzume in Japanese. Credit to http://natural-japan.net/ 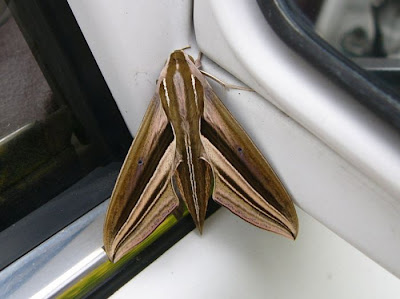 Not a very spectacular moth it seems :(
Posted by FastMatt at 3:28 AM