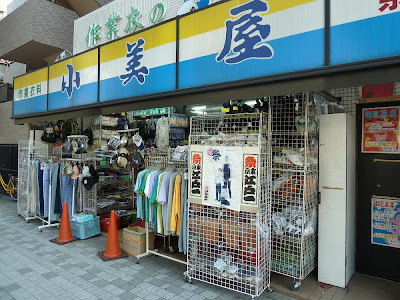 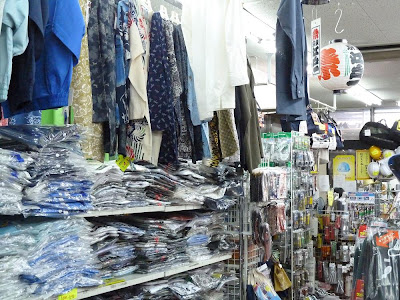 So I finally went back to Kawasaki to check out the shop that was closed last week for Obon. It was open and it seems like it's a general purpose / workman's / festival / clothing shop. They have pretty huge stocks of utilitarian stuff like tools, socks, and worker's clothes. There's also a ton of traditional matsuri (festival) clothing with cool colors and designs. Anyway, the reason I came to this particular store is because it's known to be the only place that carries gold jikatabi (split-toed workers boots). They did have them, but only 1 pair (the display pair which were too small!!). So I picked up a pair of the silver tabi in my size along with a pack of tabi socks so I can be mega fashionable back in Seattle. They're pretty cool, but not as cool as the gold. 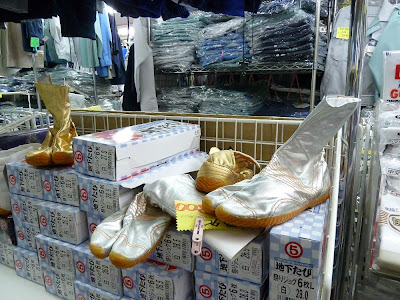 After picking up the tabi, I got the rest of my outfit at another location which I failed to take pictures of. I got a pair of black tobi pants and an open shirt and seemingly became friends with the owners (?) that were working there. It was an old guy and a younger guy (his son maybe), they were pretty helpful with my tobi search letting me try on a bunch of stuff. When I finished and paid for the stuff they tossed some free stuff (sweet black worker's bandana to absorb my head sweat) in my bag which was cool and they said they hope they see me again. Must have been a slow day.

A lot of Japanese workers wear tobi pants with jikatabi (shoes) as the clothing is loose fitting and comfortable which helps stay cool in the crazy heat here and helps reduce the chance for injuries as for example a falling object may get deflected by the folds in the loose clothing. There's other benefits to the design that I can't recall, another pro is that Japanese worker clothing is very fashionable and cool. It will make for a sweet drifting outfit back home in Seattle as well. 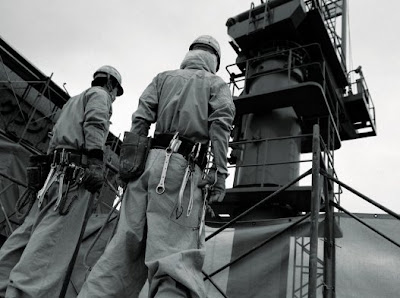 Then before heading home I got my picture taken with rilakkuma (relax bear) korilakkuma (baby relax bear). 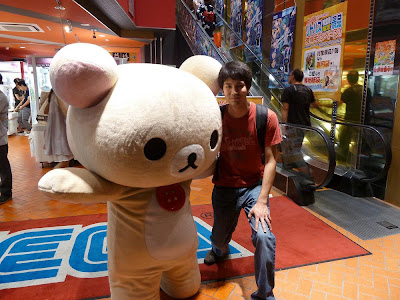