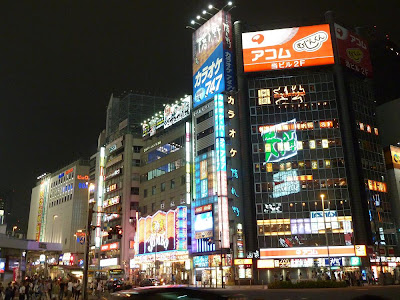 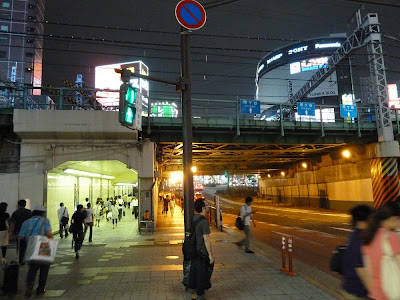 A friend (bff) came to visit me in Japan for a week or so. So starting today we did a bunch of touristy stuff, mostly redid most of the stuff that I've already done previously. Retracing steps can get pretty tiring. Tokyo is big.

Today we started off in Akihabara, explored tons of electronics shops, went arcade hopping, etc. then walked to Ueno and through Ameyayokocho which used to be a black market for American / military goods a while back. Right now it's just a big market area with tons of people and nearly anything you want / need.

Following that, we went to Harajuku to see crazy dressed people and the youth of Japan. Then went to Shinjuku to get a view of Tokyo from the Metropolitan government building--this time at night to get a view of all the fancy lights. The view is much nicer at night. 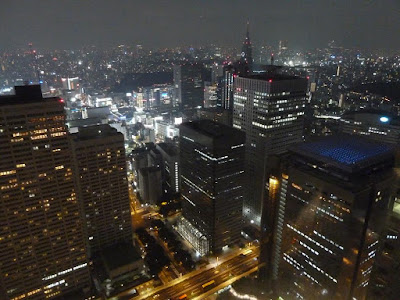 We ate dinner at an izekaya (Japanese bar) and my friend suggested one food item pictured in the menu which apparently looked like fried (golden) rings of squid to him. I read the food name and didn't see anything squid related and noted that but couldn't figure out what it was. We ordered it anyway to check it out--maybe it could be good. Sooooo... when it arrived the food didn't even look like rings, they were like balls of something. I ate one and there was something squishy and "juicy" in the center of the material and the rest was super chewy like gum. I can't really describe the taste of the squishy center parts as being pleasant, it tasted a bit like poop or tires or something like that (neither of which is good). We were both a bit disappointed and wondering what we were going to do with this stuff. I was disappointed because I hadn't encountered this stuff before and didn't know what it was although I had seen the name before. This time I would research what this stuff was when I got home--it's called horumon and wikipedia basically describes the material as beef or pork "offals," which to me means bits of stuff that shouldn't be eaten. I guess it's a learning experience.
Posted by FastMatt at 8:16 AM